The store will not work correctly in the case when cookies are disabled.

We use cookies to make your experience better. To comply with the new e-Privacy directive, we need to ask for your consent to set the cookies. Learn more.

Silk and silk production, known as sericulture, has a rich and colourful history which dates back thousands of years. It was brought to Europe in the fourth century BC but originated in China. China kept the process of making silk a secret for several thousand years; anyone who was discovered trying to smuggle the secrets out of China was put to death. 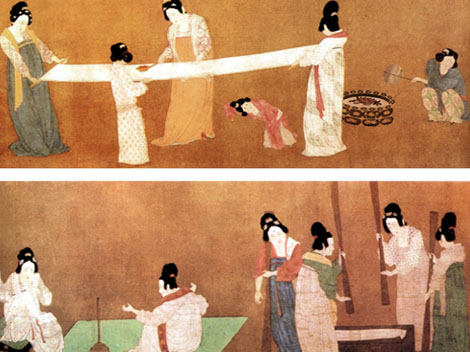 How is Silk Made?

Silk is made by the silkworm as it builds its cocoon. Although some animal hair can grow to considerable length, silk is the only natural fibre that is hundreds of feet long. It is extruded, or pushed out, by the worm in one continuous strand as it builds its cocoon. Once the silk threads are harvested, the long strands are woven tightly together to make the silk fabric.

How was Silk Discovered?

According to Confucius, it was in 2640 BC that the Chinese princess Xi Ling Shi was the first to reel a cocoon of silk. After watching a silkworm spin its cocoon, it fell into her cup of tea. The long filaments started to loosen in the hot water and she succeeded in unravelling a continuous strand several metres long. The princess instructed her serving women in the art of weaving rich, beautiful fabrics from the long silk threads.

The Chinese were so grateful for her discovery that they named the princess a goddess and patron deity of weaving. From that historic moment, the Chinese discovered the life cycle of the silkworm and for the next 3000 years were to keep their monopoly of silk.

Throughout the 18th Century, the silk industry continued to prosper in Europe, Japan and especially in China. European missionaries to China reported that “even the simplest soldiers dressed in silk”. Silk became a major part of the Chinese economy.

For a period of time, the luxurious fabric was used as a method of payment and farmers would pay their taxes in silk. The government would reward its subjects who had provided outstanding services, with silk, and civil servants even received their salary in silk. It also became a form of currency trade between China and foreign countries.

Presently, China produces approximately half of all silk made worldwide. Although there are many countries which produce very good quality silk, it is still the Chinese who are the masters at it. At Jasmine Silk, we are extremely proud to maintain these high standards and uphold the position of China as the home of the best silk in the world.

Today you can get the super soft fabric in the form of silk bedding, silk clothing and other accessories. The natural properties it possesses have made it a popular material for baby blankets, nightwear and even beauty products; all of which, you can find right here at Jasmine Silk.